Toward a precise understanding of human brains; research that can help you maintain your physical and emotional health and live life to the fullest, at any age

Your brain determines the essence of “what you are,” that is, how you would like to live your life right now and in the future, based on memory and learning up to now. Patients suffering from neurodegenerative disorders such as Alzheimer’s disease gradually lose their memory and learning ability as neurons are degenerated in their brains. We are clarifying at the molecular level precisely why and how neurons die. Based on this understanding, we sincerely hope to apply our research findings to prevent death of neurons so that everyone can fully live their life in good health, maintaining the ability to self-recognize and make decisions for themselves throughout their life. 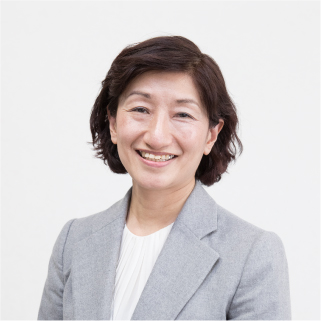 It is estimated that the total world-wide number of people with dementia will exceed 150 million by 2050 (World Alzheimer Report 2018). While human dementia is pathologically characterized by neuronal loss, many of the drug discovery efforts using rodential disease models without this pathological characteristic have unfortunately resulted in failure. Based on this fact, we believe that it is necessary to 1) identify the causes of dementia in humans and truly understand the mechanisms for the development of the disease in humans, 2) develop (hopefully low-molecular) drugs effective for dementia treatment based on the research findings, and 3) develop a diagnostic system for identifying the optimal period for treatment and determining the effects. For these purposes, we conduct research to contribute to “treatment of Alzheimer’s disease based on a precise understanding of human brains.”

Alzheimer’s disease is caused by synaptic degeneration and the resulting death of mature neurons. Although β-Amyloid (Aβ), which has been viewed as the cause of this process, is formed even in the brains of young people, it has been thought that Aβ forms aggregates and becomes toxic, causing Alzheimer’s disease. However, Aβ has very flexible properties, forming structure of over 10 kinds, and it had not been clearly revealed which kind of Aβ aggregates exists in the patients’ brains among the already reported wide variety of Aβ aggregates, and how it damages neurons. To tackle this problem, we began by exploring the kind of Aβ aggregate with the highest neurotoxicity, and as a result, were the first to succeed in isolating amylospheroids (ASPD), the Aβ aggregate that causes death to mature human neurons, from various kinds of Aβ aggregates that accumulate in human brains (Hoshi et al. Proc. Natl. Acad. Sci. USA 100, 6370–6375, 2003; Noguchi et al. J. Biol. Chem. 284, 32895–32905, 2009). ASPD is an aggregate of about 30 Aβ peptides with a consistent and stable spherical structure, which we have revealed is specific to ASPD (Ohnishi et al. Proc. Natl. Acad. Sci. USA 112, E4465–E4474, 2015). Moreover, we have recently found that the spherical structure enables ASPD to selectively bind to and target the Na+/K+-ATPase α3 subunit (NAKα3), a synaptic membrane protein that appears only in mature neurons and is essential for maintaining the resting membrane potential of neurons, and retard its functioning, causing the dramatic degeneration of mature neurons (Ohnishi et al. Proc. Natl. Acad. Sci. USA 112, E4465–E4474, 2015).

Based on the above-mentioned research findings, we are now mainly tackling the following six challenges:

We collaborate with researchers from inside and outside Japan focusing on a wide variety of subjects, from the cellular level to large animals, in a wide range of specialized fields, from biochemistry to physical chemistry, in making a breakthrough in technological challenges.

Our discoveries have been followed by a series of reports about the discoveries that the NAKα3-involved death of neurons occurs commonly in patients suffering from Parkinson’s disease and amyotrophic lateral sclerosis (ALS), in addition to Alzheimer’s disease. This indicates that we have found a new common process of the development of neurodegenerative diseases, including Alzheimer’s disease, and proposed treatment strategies for those diseases.

I hope to deepen my understanding of the mechanisms of cerebral functions and to contribute to developing safe and effective treatment based on this understanding, so that our efforts to tackle these challenges will allow patients’ brains to continue to function soundly. 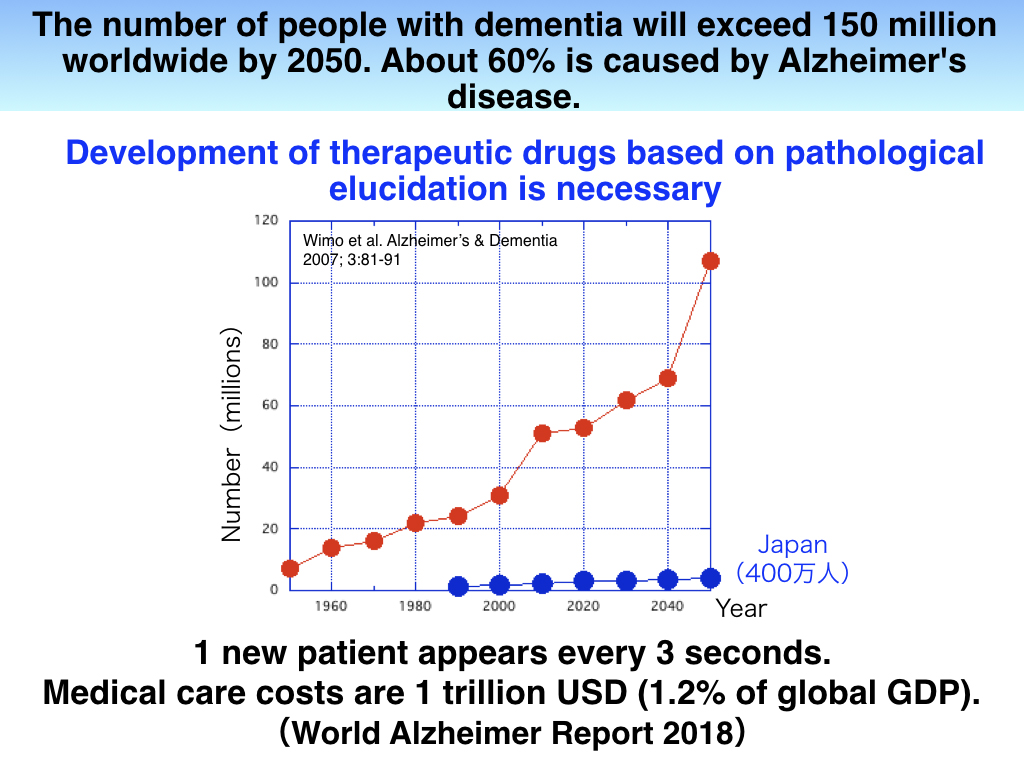 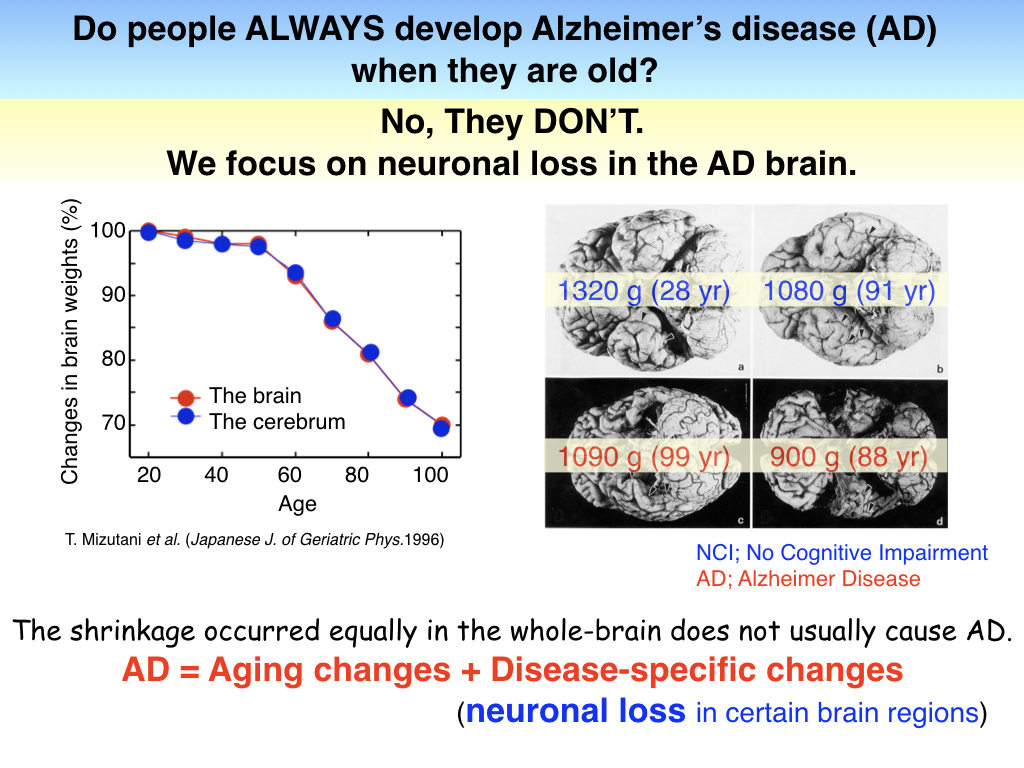 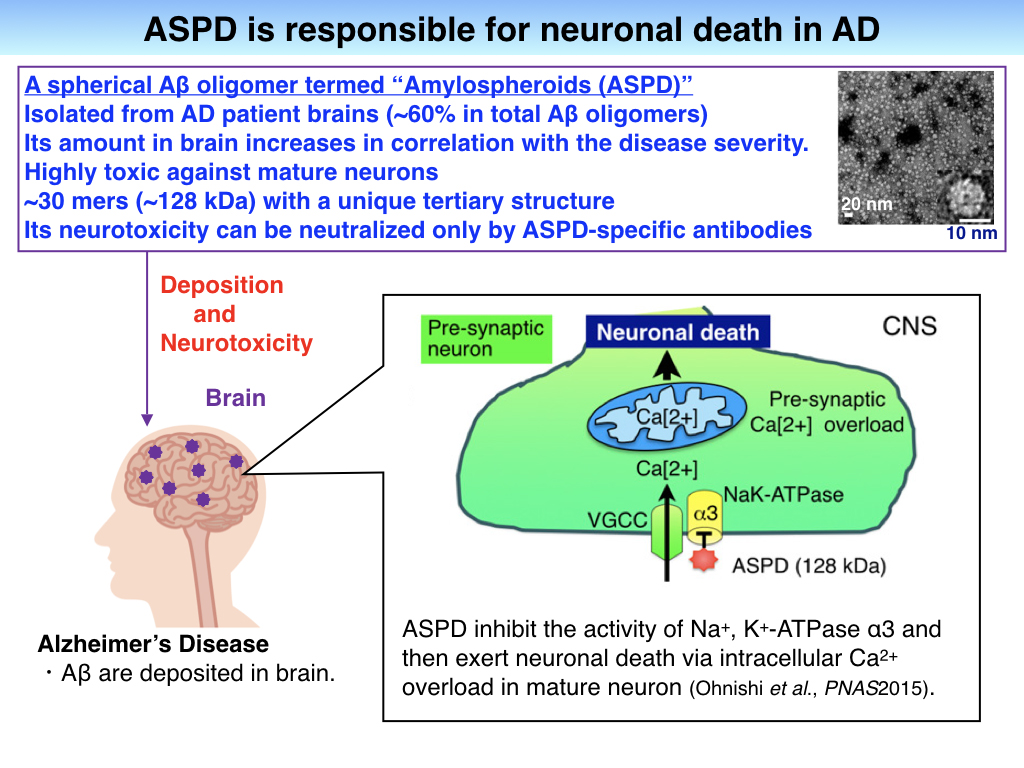 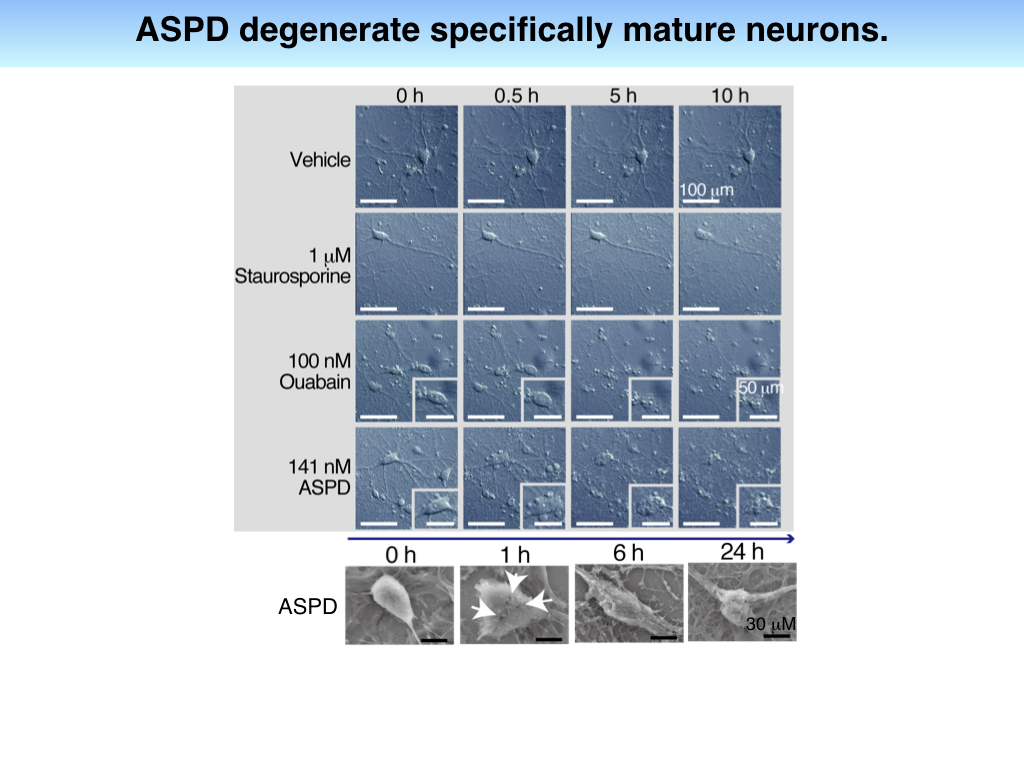 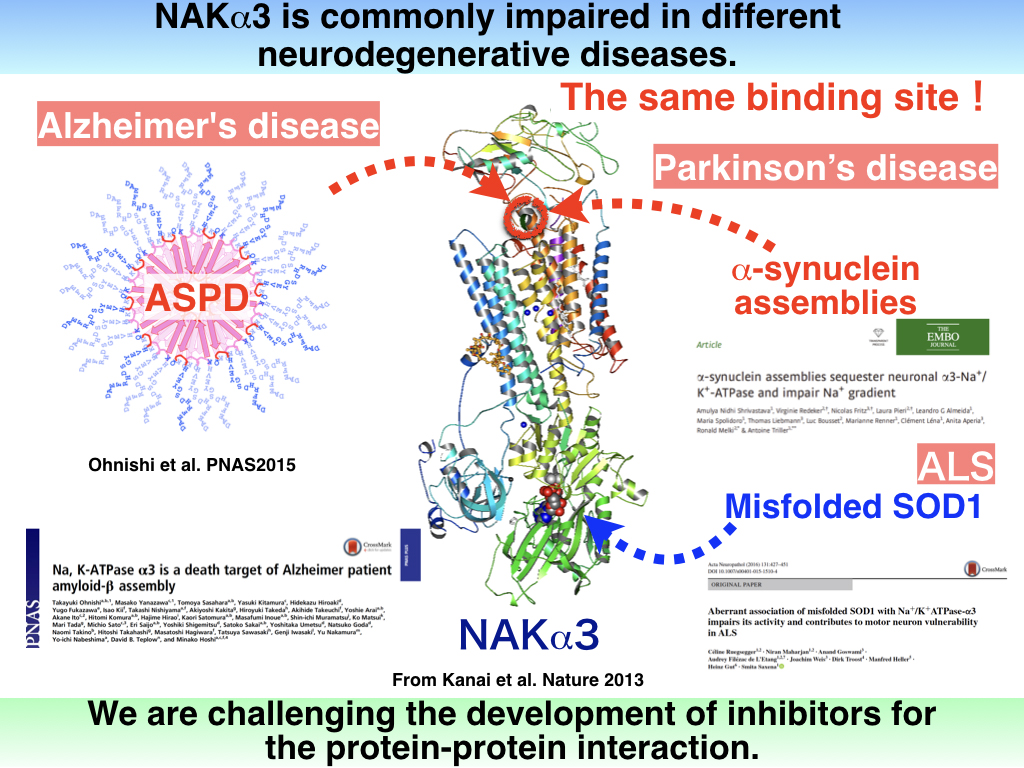 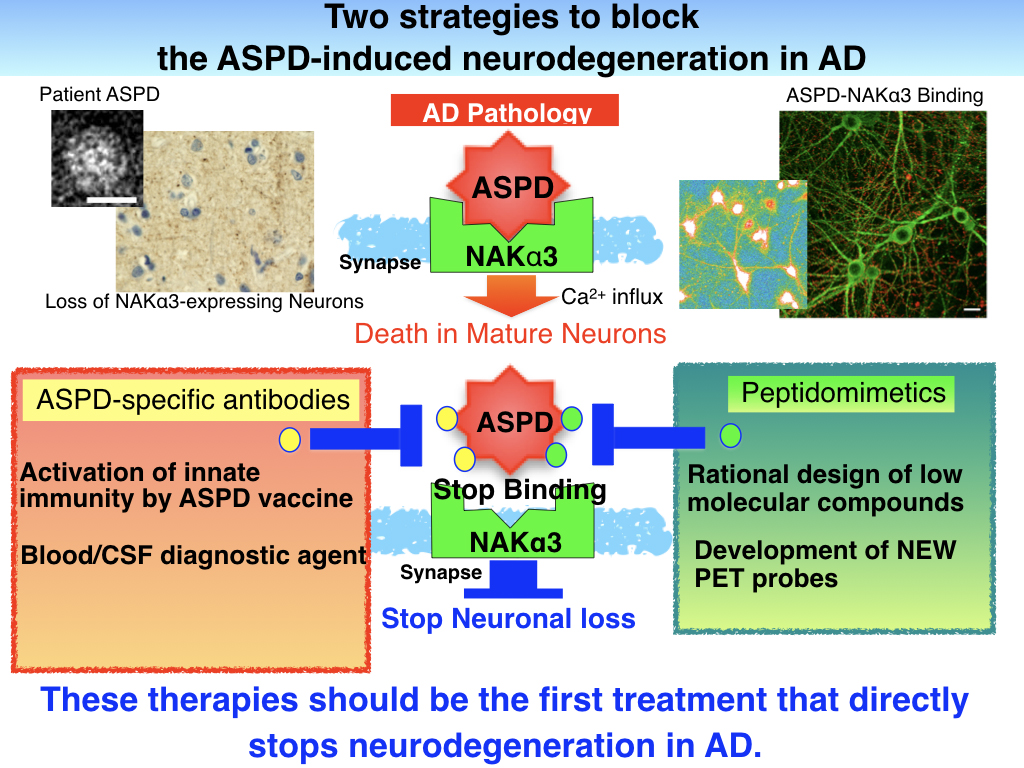 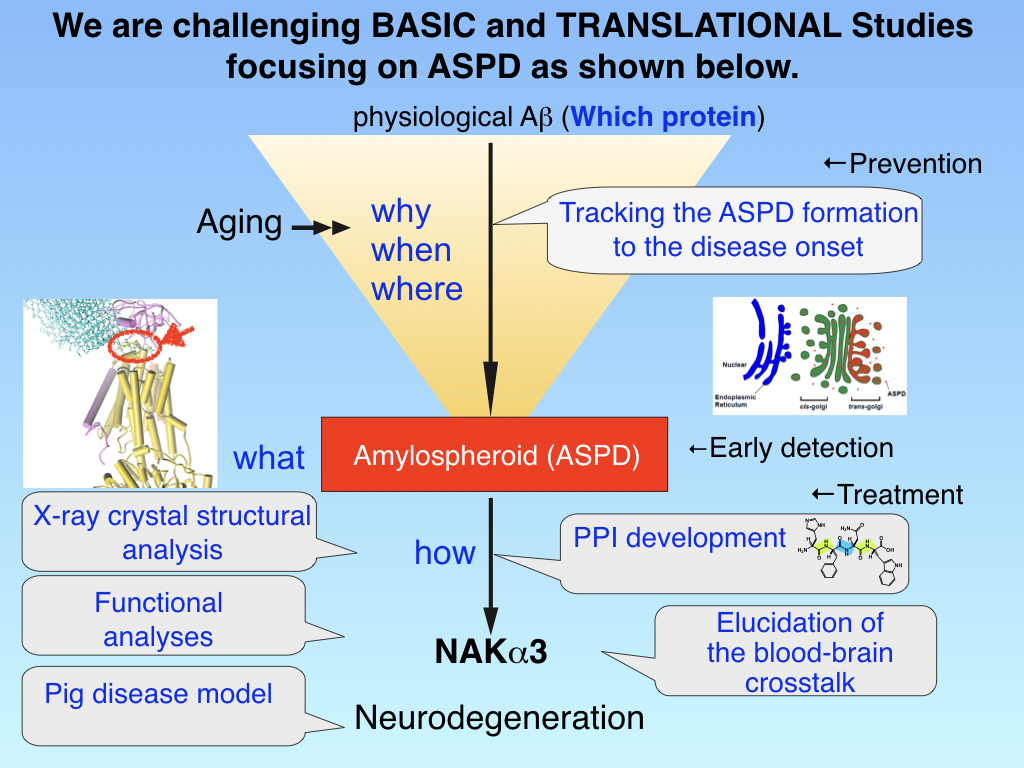